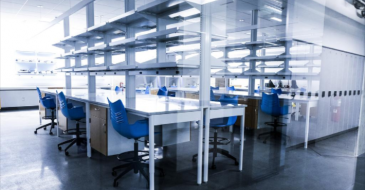 Deerfield manages over $8 billion in assets, including about $3 billion through public funds and $5 billion through private funds. Last year, the firm announced a collaborative investment effort with Hopkins, called Bluefield Innovations. Deerfield has committed $65 million over five years to help commercialize early-stage therapeutic research coming from Hopkins researchers. Under the deal, Hopkins provides the intellectual property candidates, Deerfield provides the funds to help them grow, and they share whatever returns result.

Deerfield has established five academic partnerships under the model, including with Vanderbilt University and the Broad Institute of Harvard University and Massachusetts Institute of Technology, and has been working to identify the first few rounds of technologies and innovations worth funding.

Brian Bizoza, a Hopkins alumnus and partner at Deerfield, described his firm's model during an Anchor Ventures tech networking event at Hopkins' FastForward incubator Thursday. He said the goal with the academic partnerships is to help bring as many health care products to market as possible, by "cutting the cost of failure" at the research level.

It's fairly common in the venture capital space for firms to hold off on investing in a startup or technology until it is fairly far along in development or has been through the concept phase. Deerfield is taking a different approach, and pumping funds into early-stage research that it thinks could ultimately make for a viable commercial opportunity. The hope is that the extra cash will help accelerate the technology so it can be brought to market, and either spun out into a company or acquired.

Deerfield also has in-house resources including experts on market research, customer acquisition and commercialization, as well as folks who can provide legal and accounting advice or even help with business administration tasks like setting up company email. All of its portfolio firms have access to these wrap-around services for free. Bizoza said Deerfield wants to make the biotechnology development process more efficient, by allowing researchers and inventors to spend their time focused on honing their science, and not worrying too much about the business side of things.

Bizoza said more venture capital firms have started getting in on earlier-stage research, but investments are mostly happening on a case-by-case basis. Deerfield is aiming to go beyond that and start building a real infrastructure around commercialization of academic research, he said.

Marikki Laiho, a professor of radiation oncology and director of the Division of Molecular Radiation Sciences at the Johns Hopkins University School of Medicine, received the first Bluefield investment in January. Laiho's work focuses on developing new cancer drugs.

Applications for the first round of Bluefield investments are due May 15. Bizoza hopes to be able to do two funding cycles per year at Hopkins.