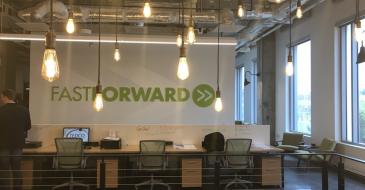 Steve Case is kicking off a new startup series from Hopkins, University of Maryland

The universities are also teaming up with Betamore for a post-accelerator program, which just opened applications.

While Case’s stature will likely give the local tech community some outward-facing attention as it did when he brought the Rise of the Rest tour here in 2015, the behind-the-scenes effort is also worth noting.

Anchor Ventures, as the series is known one of two programs rolling out in the coming weeks that are being jointly organized by Johns Hopkins and the University of Maryland. Along with Betamore, the two local anchor institutions are also launching Trajectory Next, a three-month program that’s designed to further help companies who have gone through accelerator programs.

The new programs also received $125,000 in funding each from TEDCO as part of an effort to introduce more incubators to the state.

Universities are often a catalyst of startup communities, and these two Baltimore institutions connected to big healthcare systems have each made their own moves in recent years to provide more resources to startups. The physical manifestation has come with new landing points like the University of Maryland BioPark and Hopkins’ FastForward hubs. The wider universities have been competitors before, but in coming together they want to open these new spaces up to the community, and provide more resources to entrepreneurs.

As Tom Sadowski, who serves as the University System of Maryland vice chancellor for economic development, pointed out, the programs are not the only recent example of the two universities working together. JHU President Ronald Daniels and USM Chancellor Robert Caret co-chaired a state committee on the innovation economy, and both universities were backing the recently-completed M-1 Ventures accelerator.

“With the current leadership at the University System of Maryland and Johns Hopkins, we all agree that collaboration increases the footprint of Baltimore and Maryland,” said Mary Morris, USM’s assistant vice chancellor for economic development. It echoes a point we’ve heard often from people like Case and local leaders alike: Growing the tech community will require everyone working together.

Click here to read the full article via Technical.ly Baltimore.